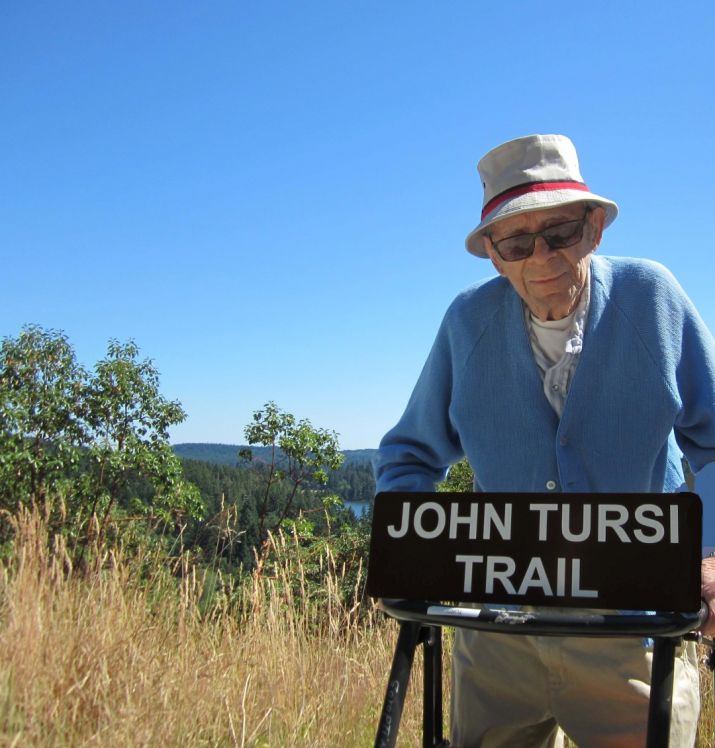 What a Difference a Mile Will Make

Above: The new Tursi Trail on Fidalgo Island. Photo by: Dave Wenning @ FidalgoWeather.net

How the Finished Tursi Trail Perfects the PNT on Fidalgo Island

History has shown that achieving the best possible route for a National Scenic Trails can take decades of collaboration and effort to accomplish. The John Tursi trail, finished in 2016, will trade traffic for tread on Fidalgo Island.

The details: the PNT makes use of the Anacortes Forest System Trails south of the city. Previously, where this trail system ends, near the Lake Erie Grocery and Trailer at the intersection of Heart Lake and Rosario Roads, the highway portion of the PNT began. Now, only a short stretch of highway connects the PNT to the new Tursi Trail.

The 1.1 mile Tursi Trail connects with segments of the Ginnet and Pass Lake Loop Trails in Deception Pass State Park, for a total of 2.4 miles of scenic tread. Previously PNT’ers traveled along 3.5 miles of road to reach the same point – where the PNT joins Hwy 20 to cross Deception Pass. One of the scenic wonders of the Pacific Northwest, the 1487 foot long Deception Pass Bridge has as average of 20,000 vehicle crossing per day.

Those who thru-hiked or traveled this section in its entirety before 2016 will fully appreciate the benefits of the new route, chiefly, relocating the trail off of Fidalgo Island highways. The new route is also one mile shorter and offers some of the best natural scenery on the island. The Tursi Trail even passes three historic sites on its way south toward other trails in Deception Pass State Park, the most-visited park in Washington.

While one mile of trail may seem like a relatively simple feat to build, the Tursi Trail was at least 17 years in the making and the project itself was, “in [Deception Pass State Park] planning documents for 50 years,” Molly Doran, executive director of the Skagit Land Trust, said in a release.

SWITMO (the Skagit Whatcom Island Trail Maintenance Organization), our long-time collaborators, spearheaded the construction effort. “Back around 1999, Doug Shepherd and a number of other people, including myself, [and former] PNTA Executive Director, Jeri Krampetz, walked a possible route from Pass Lake to the Lake Erie Grocery with local and state park personnel. John Pope led the walk. We knew way back then that this was the logical route for the PNT,” said SWITMO Treasurer, Joan Melcher.

Indeed, the Tursi Trail required a truly cooperative effort to complete. The first obstacle planners faced was its location; part of the route was in Deception Pass State Park and the other on private land.

Because nearly one third of the proposed trail would need to pass through private property, the Tursi Trail hinged on the acquisition of voluntary trail easements. This process took a five year cooperative effort between generous landowners, the Skagit Land Trust and Skagit County Parks and Recreation to negotiate.

Deception Pass Park Manager, Jack Hartt and Skagit County Parks and Recreation Director, Brian Adams played key roles in the development of the trail. “Trails are all about connections, connecting places and also connecting people to those places… this connection joins two of the most significant and visible features on Fidalgo Island — Mount Erie and Deception Pass. This connection will benefit people and wildlife for generations to come,” Hartt said in a release.

Above: Doug Shepherd using the PNTA’s mini excavator on the Ship Harbor Trail

The construction phase of the trail was led by Doug Shepherd and other SWITMO volunteers, beginning with reconnaissance and planning in the fall of 2015 and with final construction completed in November of 2016. “These trails don’t fall from the sky, you know. It usually takes a few passes hiking through brush to choose the best route and let me tell you it’s pretty tricky wading through salal up to your armpits! Next is the fun part. We flag the potential route for the trail and work to refine it.” Shepherd said.

Crew Leader, Doug Shepherd and 36 other SWITMO volunteers spent a total of 217 hours using hand tools to complete the Tursi Trail from the Ginnet Road Trail Head, north to the park boundary. Work, which included a small bridge and a bypass around a treacherous rock switchback, finished on National Trails Day last year. Washington Trails Association (WTA) and other volunteers completed the remaining third of the trail from the park boundary north.

SWITMO also built the one mile Ginnet Trail and two mile Pass Lake Loop Trail that combine with the Tursi to form the improved route of the PNT. Although the PNTA was not directly involved in building these two trails, Shepherd’s skillful use of the PNTA’s mini, trail-sized excavator helped the projects along. He would later use the machine to build a portion of a fourth trail in the area called the Big Cedar Trail. Shepherd plans to finish off his work with proper signage this spring.

The Tursi Trail was named in honor of the legacy of John Tursi, philanthropist and Anacortes community leader. Tursi first came to the area to help build the infrastructure at Deception Pass State Park during the Great Depression. Tursi worked in the Civilian Conservation Corp (CCC), one of President Roosevelt’s Keynesian New Deal programs which employed millions of young men in the construction of facilities in more than 800 parks across the country.

As a member of the Skagit Land Trust, his efforts directly protected 400 acres in the Anacortes Community Forest Lands. Pacific Northwest Trail users and Fidalgo Island residents will enjoy access to these forests for years to come, thanks to John Tursi’s generosity and vision.

#deceptionpassstatepark, #pacificnorthwesttrail, #trailwork, #volunteers, #washington
Previous Post
Welcome to our team!
Next Post
How PNTA Leadership Could Become a Model for the Trails Stewardship Act