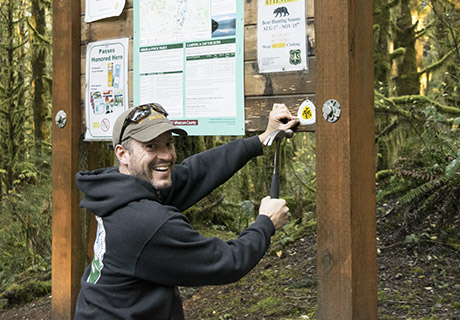 Following 14 years of service, the PNTA’s Director of Trail Operations, Lewis Trout retired this September. His departure will create new opportunities within the Association and allow for organizational changes in the trail’s management.

Executive Director, Jeff Kish will continue to provide oversight, and two new Regional Coordinator positions will allow the Association to add organizational capacity and provide regional focus in the enhancement of the Pacific Northwest Trail system. We are pleased to welcome Kristin Ackerman and Sterling Collins-Hill to our team.

This August, the Association added a new full-time staff member to our team. Since 2012, Kristin Ackerman has co-led PNTA trail crews in Eastern Washington with her husband Bodhi. As a Crew Leader, she inspired local youth to spend their summers outdoors working on the Pacific Northwest Trail, teaching them trail stewardship and backcountry living skills while camping out on the trail—often for a week or more at a time. What she loves most about the work, “is witnessing young people blossom during a summer spent living and working outdoors.”

In her new role as Eastern Washington Regional Coordinator, Kristin will work with agency partners and local volunteers to provide regional oversight of the Pacific Northwest Trail System. Based out of the USFS Three Rivers Ranger District office in Kettle Falls, she’ll establish a full time presence for the PNTA in the region.

Since 2012, Ackerman has co-led PNTA trail crews in Eastern Washington

Sterling will manage trail operations from the Wilderness Coast to the Pasayten Wilderness from our Sedro-Woolley office.

Sterling has held leadership positions with the Northwest Youth Corps, the Student Conservation Association, the Alaska Service Corps, Alaska State Parks and the US Forest Service.

In October, Sterling Collins-Hill joined the Association. Sterling will manage trail operations from the Wilderness Coast to the Pasayten Wilderness from our Sedro-Woolley office.

Sterling has held leadership positions with the Northwest Youth Corps, the Student Conservation Association, the Alaska Service Corps, Alaska State Parks and the US Forest Service. In 2012 he thru-hiked the Pacific Crest Trail. He is honored to be able to give back to the resources that have shaped who he is today and be involved with the National Trails System.

Honoring the Career of Lewis Trout

Lewis Trout first became involved with the Association in 2005, joining volunteer trail work parties near his home in Skagit County. He soon discovered that he enjoyed backcountry construction projects and working with the tools of the trade: grip hoists, chainsaws, and crosscut saws. Over his 14 year career, he would build a respectable personal collection of “misery whips” needed to clear the PNT in wilderness areas.

Most of all, he found that he enjoyed working with trail crews and he was soon offered a job as a Crew Leader with the Association. Life on a backcountry trail crew suited him. He enjoyed long days working on the trail and teaching trail and life skills to local youth. The work wasn’t easy; the PNT has a notoriously short weather window for trail work. Over the years Lewis would assemble an anthology of stories of crews facing adverse conditions and racing against early season snow storms.

All of his trail crews over the years will state he was the most positive person they could have worked under. He could change a young person’s life for the better.
-Joan Melcher, SWITMO Treasurer

Lewis Trout (left) and volunteers with the Back Country Horsemen

For 14 seasons, Trout made on the ground improvements to the Pacific Northwest Trail

Trout installs a reassurance marker along the Pacific Northwest Trail.

When he was later tasked with leading PNTA trail crews staffed with US Job Corps students, his leadership skills, forged as an Army drill sergeant and as a veteran of both Gulf Wars served him well. Lewis was naturally adept at training at-risk youth in the Job Corps program.

In 2009 Lewis was promoted to Western Washington Regional Coordinator, and in 2017, he assumed the role of Director of Trail Operations, overseeing the entire trail system.

Lewis Trout’s contributions to the Pacific Northwest Trail shouldn’t be measured in the number of bridges he built, but in his success and determination to improve the lives of young people and the trail system using the resources available. His can-do attitude and love of trails built lasting relationships across the Northwest with some of the Association’s most valued partners like SWITMO and the Back Country Horsemen.