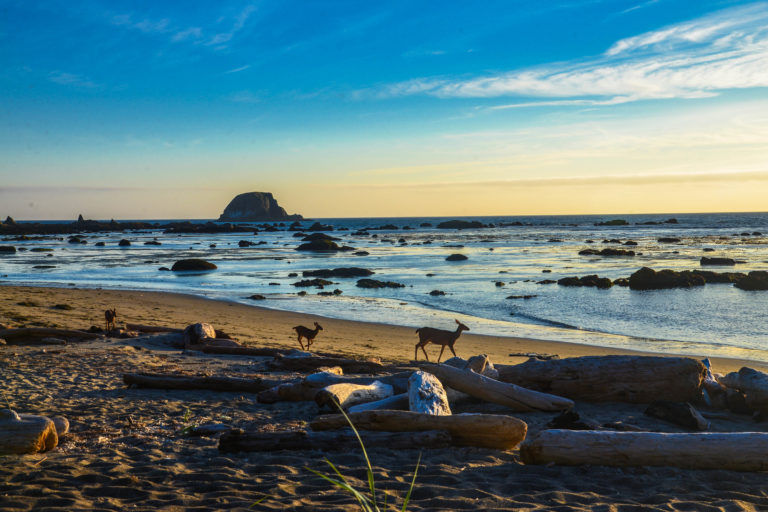 As America’s wildest and most remote National Scenic Trail, simply getting to the Pacific Northwest Trail can be an adventure, especially for those traveling without personal transportation. On the west end of the trail, a new shuttle will make it a lot easier to reach the trailhead this year.

Although bus service is available between Seattle and all major trail towns on the Olympic Peninsula, it is not possible to reach the trailhead at the Ozette Campground using public transit. This has left a challenging gap of 30 miles or more between the nearest bus stops and the western terminus in Olympic National Park.

Fortunately for thru-hikers and section hikers, getting to and from Ozette (and Cape Alava) will be a lot easier in 2019.

Anticipating the needs of our users, the Association has coordinated with a private shuttle operator on the Olympic Peninsula to accommodate visitors in Section 10. Whether your PNT adventure begins or comes to a triumphant end at Cape Alava, it is now possible to book a shuttle with the Olympic Hiking Company to travel between the Ozette Campground in Olympic National Park and trail side communities with public transit stations, like Forks, Washington.

Thru-hikers from the Class of 2015 celebrate at Cape Alava. Photo by Alex Maier.

Getting around on the Wilderness Coast without Personal Transportation

The western terminus of the Pacific Northwest Trail is located in Olympic National Park at Cape Alava, the westernmost point in the contiguous United States. Note that at the present time, no monument has been erected to mark the western end of the PNT, but the location is easy to find. It overlooks Ozette Island and is located near the popular backcountry campground in the Park.

Cape Alava can be reached by a three and a half mile trail from the Park’s Ozette Campground and Ranger Station. You can find a map of the PNT in the park, here.

To travel to and from Ozette without personal transportation, visitors need to either book a private shuttle or find other private transportation to travel the remaining 30-50 miles from the nearest bus stops at Forks, Clallam Bay, or Neah Bay.

A private shuttle operated by the Olympic Hiking Company has a route which parallels the PNT along the Wilderness Coast between Oil City and Neah Bay. You can find the shuttle’s schedule, here. The shuttle operator is usually able to accommodate quick drop-off requests for PNT hikers at bus stops along the route at Neah Bay, Clallam Bay or in the trail town of Forks, so that they can use public transit to reach Seattle and other destinations. Olympic Hiking Company can also arrange custom shuttle trips throughout Olympic National Park.

Please note that all shuttle trips with Olympic Hiking Company must be booked in advance.

Using Public Transit to Access the PNT on the Olympic Peninsula

From SeaTac Airport in Seattle, it is possible to travel to the major trail towns of Forks, Port Angeles, Port Townsend via a series of buses and a Washington State Ferry. You can plan your trip by using the Jefferson Transit and Clallam Transit schedules online, or simply by using Google Maps and the transit filter.

For more information about getting permits without personal transportation and getting around on the PNT, visit our Directions and Transportation page.