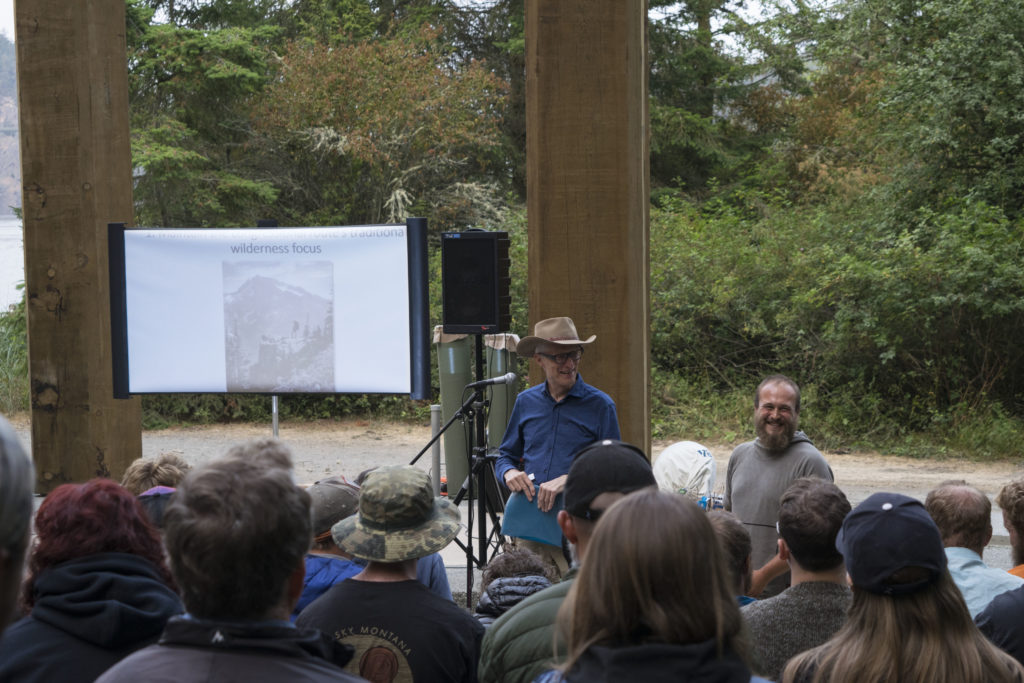 PNT founder, Ron Strickland summoned 2017 PNT thru-hiker, Tyler Yates, to the stage to speak about the wilderness character of the PNT.

Deception Pass State Park offered the ideal backdrop for the event with scenic views of the Pacific Northwest Trail where it crosses over Deception Pass Bridge, just a short walk away.

Later, four decades of PNT history seemed to culminate as Strickland summoned 2017 PNT thru-hiker, Tyler Yates, to the stage. He called on Yates to speak of the wilderness experience offered by the trail today, and why the rugged character of the trail must be preserved for the enjoyment of future generations.

The most-visited state park in Washington made for an ideal location for a PNTA membership drive and to share the story of this lesser-known National Scenic Trail. The popular Washington state park includes over ten miles of PNT tread, and represents a navigational and ecological highlight of the trail as it makes a dramatic crossing between Fidalgo and Whidbey Islands.

Throughout the day, campers and park visitors were invited to free events, including two guided hikes on the PNT, led by PNTA interpretretive Ranger, Seher Khan. Other passers-by learned of the world-class recreation opportunity offered by the PNT at our info booth and pop-up history museum. On the shores of West Beach, park visitors could practice the art of the cross-cut saw in a saw bucking demonstration by Director of Trail Operations, Lewis Trout.

At the social hub of the event, the beer garden, the association’s founders, members and nearly a dozen 2017 thru-hikers convened over refreshments, donated by Base Camp Brewing. Curious locals and trail enthusiasts from afar celebrated the creation of a world-class long distance trail over fine ales and lagers generously donated in support of the association.

Joan Melcher and PNTA partner organization SWITMO (Skagit Whatcom Island Trail Maintenance Organization) finished work on the East Hoypus Trail nearby, in time to put on a picnic luncheon that afternoon for their trail maintenance volunteers and PNTA members.

Other exhibits featured key historic photos and newspaper clippings to illustrate the enormous effort put forth by the PNTA, grassroots trail builders, volunteer cartographers, and dedicated trail maintainers which made the dream of a Crown to Pacific Pathway possible and helped the Pacific Northwest Trail earn federal designation as a National Scenic Trail, in 2009.

Top Left:  Rosie Matsumoto gave a presentation on her interpretive work, “How Do We Connect.”  Top Right: A 40th Anniversary attendee inspects the trail’s latest map set, displayed in the PNTA’s pop-up history museum. Left:  Park Ranger, Montana Napier played a big part in organizing the event.  Right:  The exhibit included guides to the PNT, printed between 1979 and 2017. Shown here are three editions of the Pacific Northwest Trail Guide, by Ron Strickland, with maps by Ted Hitzroth. Photos by Miguel Aguilar.

Moments From Our 40 Year History

The nearby West Beach Shelter was converted into a pop-up history museum for the day. Current year thru-hikers and others marveled at reproductions of the original two-page ‘guidebook’ published in Signpost Magazine in 1979, two years after the first five end-to-enders completed self-reliant crown-to-coast adventures.

Original copies of the Pacific Northwest Trail Guide, published in 1984 and 2001 were also on display. Amazingly, until Ron Strickland published the first book-length guide in 1984 and the PNT’s cartographer, Ted Hitzroth created the first trail maps featured in that edition, the trail’s first 16 end-to-enders navigated from the Divide to the Pacific Coast without these basic resources.

Other exhibits featured key historic photos and newspaper clippings to illustrate the enormous effort put forth by the PNTA, grassroots trail builders, volunteer cartographers, and dedicated trail maintainers which made the dream of a Crown-to-Pacific pathway possible and helped the Pacific Northwest Trail earn federal designation as a National Scenic Trail, in 2009.

As a blood orange sun neared the horizon, members of our trail community and park visitors joined Pacific Northwest Trail founder, Ron Strickland, at the North Beach Amphitheater on the shores of Deception Pass for the main event of the day’s festivities.

Strickland’s unmatched passion for the trail was palpable as he took the audience on a 40 year journey, starting with the audacious dream conceived as a headstrong youth through the emotional triumph of earning Congressional designation as our newest National Scenic Trail.

Even those unfamiliar with the history of the PNT could sense the personal investment and dedication to the trail, a project which would have been impossible if not for the grassroots volunteers across the trail’s length, and the Pacific Northwest Trail Association, which Strickland founded.

Later, four decades of PNT history seemed to culminate as Strickland summoned 2017 PNT thru-hiker, Tyler Yates, to the stage. He called on Yates to speak of the wilderness experience offered by the trail today, and why the rugged character of the trail must be preserved for the enjoyment of future generations.

Although great care was taken to honor the history of the Pacific Northwest Trail, including the many volunteers that labored for decades to give us the trail that we enjoy today, the evening’s events turned a gaze toward the future, and challenged members of the audience to consider how they will become a part of its legacy.

PNTA members and park visitors enjoyed a special screening of A Sense of Direction, a feature film by Alex Maier about a thru-hiker’s perspective of the Pacific Northwest Trail. Photos by Miguel Aguilar.

The stars of Alex Maier’s feature film about the Pacific Northwest Trail, A Sense of Direction, posed in front of Deception Pass before a special screening of the film at our 40th Anniversary Celebration. Several of the characters featured in the film were gathered in the audience to relive their 2015 thru-hiking adventures, together with our trail community, on the big screen.

The PNTA would like to thank our members, volunteers and trail community, particularly Ron Strickland and Alex Maier, for joining us for this special event – the largest in recent history.

We would also like to thank everyone for making our fundraising gear raffle a success. Lucky PNTA supporters walked away with over $3,000 dollars of gear generously donated by: Granite Gear, Montbell, Sawyer, CNOC Outdoors, Ursack and LED Lenser.

We would also like to thank Park Manager, Jack Hartt and Deception Pass State Park staff for providing the facilities and planning resources for the event.