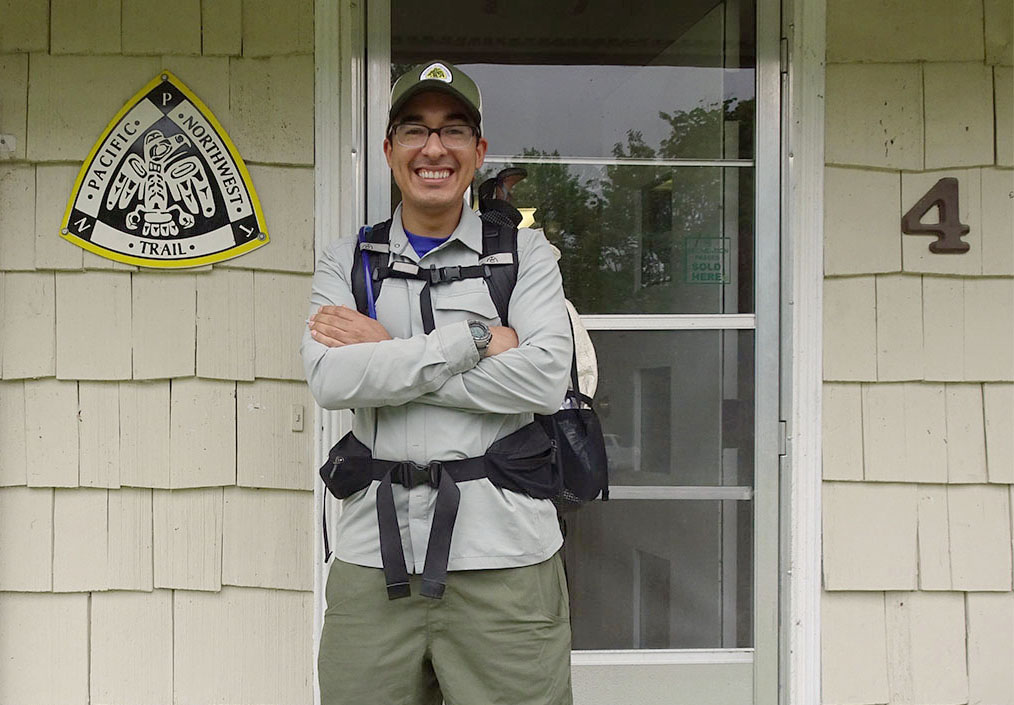 David Zermeno poses in front of the PNTA office before departing for Montana to begin his 1,200 mile adventure

Before setting out on his Crown-to-Coast adventure on the Pacific Northwest Trail this summer, thru-hiker David Zermeno spent an entire month volunteering with the PNTA!  David gave a whopping 177 hours in service to the trail and helped make our 2017 mapset possible.

I first met David at an outreach event, called “Plan Your Thru-hike,” put on by REI, Portland. Many of the aspiring thru-hikers there had not yet heard of the Pacific Northwest Trail, but David, who had completed a thru-hike of the Pacific Crest Trail in 2015, had already felt the call of adventure of the PNT and was planning an end-to-end hike this summer.

Easy-going and meticulous, David made an ideal partner on our map production assembly line, often working late into the night alongside PNTA staff

After fielding his questions about the adventure-challenges unique to the PNT, like bushwhacking and route-finding, our conversation switched to enumerating the pros and cons of each of the 15 major alternates on the PNT.

Although David was experienced with snow travel after crossing the high passes in the Sierras during his PCT thru-hike, he planned to leave his ice axe at home and wait for the snow to melt before making his way across Glacier National Park. Instead, he opted to wade through alpine meadows aglow with wildflowers on his way to Bowman Lake rather than traverse the high-angle snow fields on the Kintla Lake Alternate.

At the end of the event, David surprised me by sharing his plan to give the PNTA an impressive 100 hours of his time before hitting the trail. To his word, David arrived at our Sedro-Woolley office in late April, ready to pitch in.

Although he had hoped to invest sweat equity by helping to maintain the tread of the PNT, under the heavy snows of 2017, the PNTA’s trail maintenance season would not begin until after he started his 1,200 mile journey. David’s only on-trail assignment would be to scout the East Bank Baker Lake Trail for our crews which would arrive to work there later in the season.

Instead, David’s professional design skills were tapped to produce the PNTA’s 2017 map set. After creating a clever set of custom map icons, David’s production skills were put to use. And with hiking season just around the corner, his timing could not have been better coordinated. Easy-going and meticulous, David made an ideal partner on our map production assembly line, often working late into the night alongside PNTA staff.

With 15 major alternates and the ideal corridor of the Pacific Northwest Trail yet to be established, the PNT is far more complex and dynamic than most users appreciate. Historically, this has made finding an authoritative source of information, which is responsive to the latest changes to the ever-evolving trail corridor, one of the challenges in navigating the PNT.

Thanks in part to David’s outsized contribution to the effort, the PNTA’s 2017 mapset will share the most up-to-date and accurate information available in one convenient location. So, if you see David on trail this year, be sure to give him a high-five!