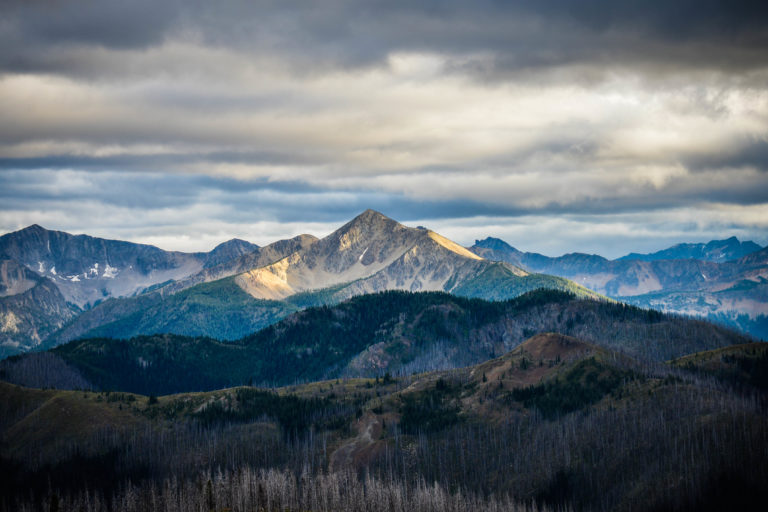 Restoring the Pacific Northwest Trail in the Pasayten Wilderness after last year’s Diamond Creek Fire is a priority for the Association and our partners in 2018.

Nearly 100 miles of the PNT falls within the 531,000-acre Wilderness, a highlight of the trail in Washington which offers the longest roadless stretch of the National Scenic Trail’s corridor.

The immersive wilderness experience offered by this stretch of remote trail earns it a place on many outdoor enthusiast’s life lists. With 150 miles between resupply points, the PNT presents a challenging traverse of untrammeled landscape, crossing from the open grasslands in the eastern portion of the wilderness to the dramatic peaks in the west.

Volunteer trail scouts counted over 1,000 downed trees
between the Cold Springs Campground and Castle Pass
where the PNT joins the Pacific Crest Trail.

Aside from the length of the section, the rugged character of the Pasayten Wilderness makes for a challenging backcountry experience. While naturally-occurring fires have played an important role in forest health, they have compounded the challenge of keeping trails open and safe.

Over time, several fires have contributed to a trail maintenance backlog which helped earn a large portion of the wilderness designation as a priority area by the USDA earlier this year.

After the news that last year’s Diamond Creek Megafire had burned an additional 128,000 acres in the Wilderness – including 22 miles of the PNT/ Boundary Trail – many felt the call action. Trail maintainers familiar with the effects of fire anticipated serious hazards for travelers and stock, such as burnt out stump holes, unstable slopes, snag forests, and an unknown number of downed trees across trails.

Left: Assistant Crew Leader, Seth poses with a Goat’s-Beard seed head.   Middle: The crew took care not to a small bird’s nest discovered along the trail.   Right: The crew worked to repair sections of tread damaged by erosion so that equestrians and others could use the trail safely.

Under the direction of the US Forest Service, trail maintenance organizations from all over the state partnered to restore access as soon as snow covered trails began to melt out.

Over the Fourth of July holiday, the PNTA partnered in a work party with four other organizations for a five day trip on the Andrews Creek Trail. Other trail maintenance organizations included the Back Country Horsemen of Washington, Washington Trails Association, and the Pacific Crest Trail Association. The Methow Ranger District of the Okanogan-Wenatchee National Forest also joined the work party.

By partnering together, crews were able to achieve more. In this large roadless area, where snags fall like autumn leaves, coordinating trailwork with sawyer teams is critical. Trail crews must transport tools and supplies to work sites and remote spike camps, often a day’s hike or more into the wilderness. Pack stock support, provided by volunteers with the Back Country Horsemen help make this process far more efficient.

Volunteers with the Back Country Horsemen
worked to replace a puncheon bridge destroyed by the fire –
it was less than a year old, crews had just replaced it the year before.

The crews began with the Andrews Creek Trail 504, a critical pathway between the PNT at Spanish Camp and road-accessible trailheads along the southern boundary of the Wilderness. Restoring access was a priority for the work party – it would enable stock to reach the Boundary Trail, 16 miles north, and enable packers to deliver equipment and supplies to other trail crews working there.

Sawyer teams worked their way north to clear the way for pack stock. It was a labor intensive process. They manually removed down trees with crosscut saws, as required by wilderness regulations. After access was restored, volunteers with the Methow Valley Back Country Horsemen worked to replace a puncheon bridge at the north end of the trail that had been destroyed by the Diamond Creek Fire – it was less than a year old, crews had just replaced it the year before.

At the southern end of the Andrew’s Creek Trail, one of the PNTA’s Performance Crews worked to repair tread damaged by erosion. These crews are staffed with high school-age youth from communities near the PNT.

After a high snow year, the fire-damaged forest was unable to absorb spring run-off as it had before. The youth crew worked to repair badly washed out sections of trail and to prevent future erosion by installing french drains, water bars, and other drainage features.

They also worked to remove stubborn woody brush and shrubs like snowbrush and falsebox whose growth went unchecked in the  defoliated snag forest. Fueled by extra sunlight, new growth had overtaken the trail.

Left: US Job Corps Students spent five days working on the PNT in the Pasayten Wilderness.   Right: The crew takes a water taxi across Ross Lake to reach Devils Junction.

Over sixty trail miles west of Spanish Camp, a second PNTA crew, made up of US Job Corps students, worked their way east along the PNT. Job Corps helps young adults, ages 16 – 24, improve the quality of their lives through vocational and academic training.

After a taking a water taxi across Ross Lake, the crew climbed up the steep Devils Ridge Trail.

The trail had been cleared of down trees in 2017, but due to the deteriorating condition of the trail, equestrians were unable to use it safely. The PNTA crews set out to fix that. Large loose rocks and slough and berm were removed from the tread and switchbacks were reinforced. Crews also worked to restore the trail to equestrian standards. They performed heavy brushing along the steep trail and repaired areas that were badly eroded.

Further east along the trail near Deception Pass and Sky Pilot Pass, the PNT will need more attention. Muddy areas and sections of old rotted decking are problems to be addressed by future work parties.

Thanks to the collective effort of hardworking volunteers and trail associations, at the end of the work party Andrews Creek and other trails in the Wilderness were much improved and once again passable to stock and hikers alike.

As one volunteer put it, “trails don’t maintain themselves.” It is clear that the challenge of keeping trails open in the Wilderness will be ongoing. Visitors to the Pasayten should be aware that snags continue to fall along trails, sometimes within hours of being cleared. Hikers should be prepared to navigate blowdowns, and equestrians are advised to pack hand saws and be prepared to cut their way out if needed.

PNT enthusiasts that feel the call to action can also help by making a donation in support of PNTA trail crews and by looking for future volunteer opportunities with the Association or our partners.

As one volunteer put it, “trails don’t maintain themselves.”
It is clear that the challenge of keeping trails open
in the Wilderness will be ongoing.

Not all volunteer projects require physical labor; trail scouting and creative help can be just as valuable. In July, two PNT section hikers volunteered to collect data for over 70 miles of the PNT in the Wilderness. Their detailed report shows over 1,000 downed trees between the Cold Springs Campground and Castle Pass where the PNT joins the Pacific Crest Trail.

While it was known that the Diamond Creek Fire burned in a mosaic pattern – leaving some areas untouched and others severely burned – their on-the-ground reporting helped PNTA to better understand trail conditions in the Pasayten.

Fortunately, popular destinations such as Spanish Camp, Remmel Lake and Upper Cathedral Lake were largely unaffected by last year’s fire. The volunteers concluded that despite the effects of wildfire in the Pasayten, the Pacific Northwest Trail is still beautiful and well worth the effort to visit.