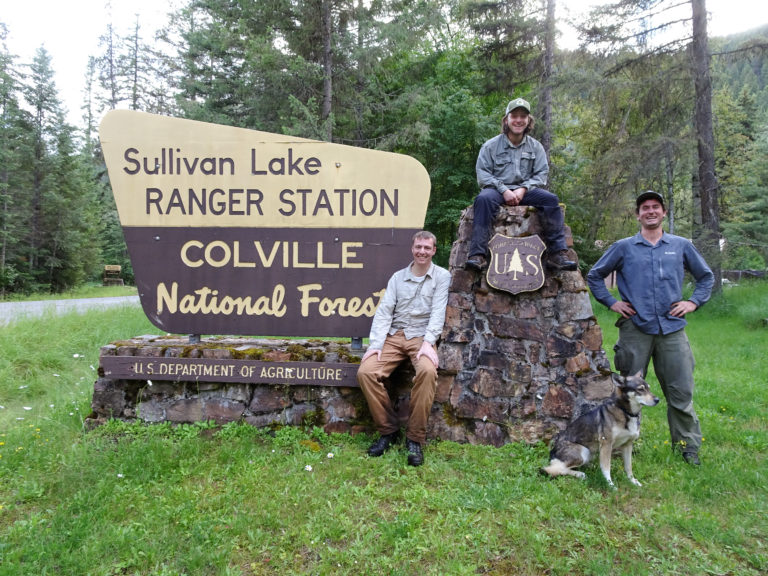 After thru-hiking the Pacific Northwest Trail from end-to-end last year, Christian “Blues Clues” Frey returned to the PNT for his Fourth of July holiday, not to hike the trail, but to lend a hand with maintaining it.

Thoughtful and unassuming, Christian earned the trail name, Blues Clues for his ability to reunite other thru-hikers with their lost gear.

Having grown up skiing in the Green Mountains, and later working as a ski instructor, Christian was drawn back to the Cascades after his life-changing trip on the PNT. It didn’t take him long to find work as a computer programmer and to relocate to the Seattle area.

I’m glad I was able to help out – I really enjoyed the opportunity to give back to the trail, and the chance to see more of Eastern Washington. It was great to get out to see some of the Sullivan Lake Trails I had to detour around last year.

After hiking the trail during the worst wildfire season in years, Christian knew firsthand the effects fire had on the Northwest. In all, five major fires threatened the Pacific Northwest Trail in 2017.

Between Metaline Falls and Priest Lake alone, two wildfires caused a number of trail closures and wildfire detours. The longest of these added over 55 miles of road-walking to Christian’s and other hikers’ journeys.

To restore the PNT after the Noisy Creek Fire, the Association’s trail crews needed a little extra help, and Christian answered the call for drop-in volunteers. As he put it, “The trail gave me so much, and I wanted to give back.” As a PNTA volunteer, Christian had the opportunity to experience a day in the life of two very different crews.

We met up with one of our Performance Trail Crews at their camp on Sullivan Lake, just south of Metaline Falls. These PNTA Crews are staffed with high school-age youth from communities near the PNT. This crew was made up of students from the Tonasket area who were happy to have some extra help working on the Colville National Forest.

The summer work experience for the crew can be challenging and character-building; the crew often works from remote backcountry spike camps, and spends long days working in challenging conditions. More than a summer job, crew members are trained in first aid, CPR, trail-building and maintenance techniques, work safety, backcountry camping, and Leave-No-Trace Ethics.

It was really cool to see how the new section of trail came together out of rough forest – I have a new appreciation of the difficulty of building the PNT!

As we shared a camp meal prepared by Crew Leaders Bodhi and Kristin Ackerman, they laughed as they explained that on this trip, their rustic campground accommodations seemed luxurious. Compared to the kind of backcountry camping they were used to, amenities like picnic tables, bear boxes, and potable water provided great comfort and helped make camp life easier after long days working on the trail.

Top Left: Crew Leader, Kristin Ackerman assigns duties and tools to the crew.  Top Right: Volunteer, Christian Frey enjoys a break from trail work with the crew.  Bottom Right:  Noisy Creek gushes down the former route of the PNT just below the new segment of trail.  Bottom Left:  Christian Frey helps to clear a path to reroute the trail.

The next morning, following a hearty breakfast, we stretched and had a tailgate safety meeting. Our crew then hiked three miles up the steep Noisy Creek Trail. We climbed through forests untouched by fire, past peek-a-boo views of Sullivan Lake, following Noisy Creek to our worksite. Further east, as the trail grew closer to Hall Mountain, the wildfire had burned with great intensity – the Ackerman’s told me the PNT looked like it had been “nuked” by the fire.

At our location, it was plain to see that the PNT had served as a fire break, with carbon black trees to the north and lush foliage opposite. The crew returned to this spot because a run-off event had jammed up the creek’s former route, and now Noisy Creek gushed straight down the trail. The trail bed was badly eroded and its condition was only getting worse.

After a careful assessment, the Ackerman’s agreed that the best solution was to construct new tread on higher ground through the burned forest. They assigned roles and tools to the crew and volunteers and our team dispersed.

Working in a line along the trail, each crew member “cut” into the burned soil, working down past roots and rocks toward mineral soil that would provide a reliable trail bed. As work progressed, we bumped down the trail, moving on to a section previously roughed in by a teammate. Before long, with each of us taking successive turns at the earth, we had sketched out the rough contours of a hiking trail.

Left: Crew Leader, Bodhi Ackerman swings a “beast,” a modernized Pulaski to clear the trail.  Top Right: The crew sizes up the situation – a run-off event left Noisy Creek cascading down a stretch of the PNT.  Bottom Left: Crew Member, Enrique trains to use a folding saw to fell a hazard tree and widen the trail bed.

With our Crew Leader’s direction, holes and low spots were filled. Rock cribbing was built from local materials to support a properly graded trail bed and prevent erosion into the rushing creek below. Many hands made for light work, and by late afternoon, we had constructed over one hundred feet of new trail, and improved another hundred.

The entire team seemed happy with the results. For Christian and me, it was a satisfying experience to see a large project tackled in a single day. On our hike back down the mountain Christian remarked, “it was really cool to see how the new section of trail came together out of rough forest. I have a new appreciation of the difficulty of building the PNT. ”

While we didn’t see anyone using the trail that day, it was easy to imagine that the next visitor – perhaps a mushroom hunter in search of the morels, or a thru-hiker – would take notice of our work and appreciate that the new trail would help them keep their shoes dry.

At the end of the long day moving rock and earth, Christian and I helped the crew pack out their assorted tools – it was their last day in the field. After enduring a cold, wet week on the Forest, they were ready for a break, and to return home for the Fourth of July holiday.

Top Left: Volunteer, Christian Frey poses with the Performance Log-out Crew after a long day working on the trail.  Right:  Frey uses a folding saw to buck a down tree burned by the Noisy Creek Fire.  Bottom Left: Crew Leader, Forest Reeves (left) and Cameron Cook (right) keep the PNT and other trails on the Colville National Forest open by clearing down trees along their path.

The following day, Christian and I spent the day “swamping” or assisting the PNTA’s Log-out Crew, as they worked to clear trails of down trees on Abercrombie Mountain.

Unlike other forms of trail work that can involve long hours at a single worksite, on a log-out crew, sawyers spend the day on the move – bucking trees that have fallen across the trail and impede hikers, cyclists, and equestrians. They scout trails, felling hazards and clearing fast-growing trees, like alder, that quickly overgrow sunny patches of trail.

We split into teams of two, each of us following a sawyer, and clearing the branches and logs they cut from the trail so they could continue on. Experts with chainsaws and crosscut saws, this was the fourth season that Forest and Cameron had spent logging out the many rugged trails in the area, and they knew every twist and turn by memory.

“On one day we cleared 83 down trees – I think that was our personal best. On another, we felled over 60 hazard trees and cleared another sixty,” said Crew Leader, Forest Reeves.

As we climbed higher to the mountain’s subalpine meadows, heavy rain turned to hail. Even still, the work kept us warm. The sun returned by afternoon, and the wildflower meadows along the North Fork Silver Creek Trail glowed against the darkened sky.

After a long but satisfying day on the mountain – hefting logs and sawing branches – I asked Christian which kind of trail work he preferred. While he agreed that building trail was satisfying, he’d probably be more likely to join a team of sawyers.

Trips on the Pacific Northwest Trail inspire all of us. We’re compelled to take photos, to learn the history of the area, to learn the names of peaks and plants and animals unknown to us, and to return to see the trail in a different light or season.

For those who walk its entire length in a season, it’s easy to be moved by the experience. Christian, like many thru-hikers before him, returned to the trail to pay it forward and ensure that the next hiker has the same opportunity for a meaningful adventure.

He helped restore parts of the PNT that had been closed during his thru-hike. In total, he gave more than 40 hours in service to the trail over the Fourth of July holiday, and I came to learn that he used the last of his available vacation hours to do it.

As our trail community grows, more and more people will discover that volunteering can be just as rewarding as hiking or recreating.

The National Trails System holds deep value for all of us – it’s perhaps best described as “one generation’s gift to the next.” For Christian, a love for long trails and adventure was only ignited by his end-to-end hike of the PNT. Next, he’s planning to tackle the Pacific Crest Trail and to train to become a pilot.