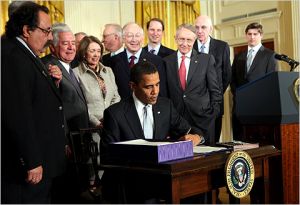 10 years ago today, legislation was introduced to both houses of Congress, which led to the designation of the Pacific Northwest National Scenic Trail.

Though the history of the Pacific Northwest Trail extends back to the early 1970’s, the journey through Congress that culminated in the Trail’s designation as a national scenic trail began on April 30th, 2008.

The testimony went well, and S. 2943 passed the full Senate Committee on Energy and Natural Resources of the 110th Congress with overwhelming bipartisan support, before being inserted into the Omnibus Public Lands Management Act of 2008.

The Omnibus Public Lands Management Act of 2008 contained a collection of related legislation which had already been considered and received preliminary support from members of Congress at the committee level.  Despite having support from both sides of the aisle, the Act didn’t come to a vote before the close of the 110th legislative session on January 3rd, 2009.

On January 7th, the Omnibus Public Lands Management Act of 2009 was introduced.  The Pacific Northwest National Scenic Trail Legislation was included in the original text of the bill, and would remain unchanged and uncontested throughout the Act’s journey to the desk of the President.

The Act would ultimately designate six new national trails, including the Pacific Northwest Trail, Arizona Trail, and New England Trail as the newest national scenic trails; the Washington-Rochambeau Trail and Trail of Tears as national historic trails; and the Ice Age Floods Trail, as the first national geologic trail.

In addition to national trail system additions, the Act would designate over 2 million acres of new wilderness, and add thousands of miles of new additions to the National Wild and Scenic Rivers System.

On March 30th, 2009, Barack Obama signed the Act into law, and the Pacific Northwest Trail was officially designated as one of our newest national scenic trails – a distinction that remains to this day.