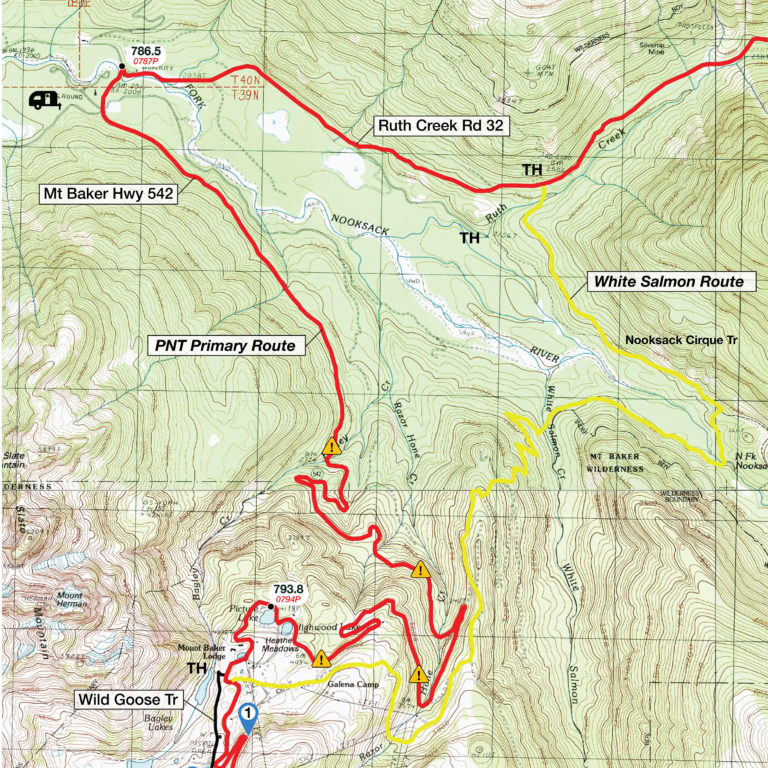 Between Hannegan Pass Road, on the Mt Baker-Snoqualmie National Forest, and the Chuckanut Range, the PNT underwhelms; the experience just isn’t consistent with the quality users expect of a National Scenic Trail. Even worse, the PNT follows dangerous highways and crosses private property where permanent access is not guaranteed.

Trail relocations proposed by the Pacific Northwest Trail Association could change this, and instead showcase the world-class scenery that residents of Northwest Washington take pride in. Mount Baker-Snoqualmie National Forest and the state Department of Natural Resources are each planning how to manage public lands in Whatcom County. Now is your chance to voice your support and help us to build a better PNT in Section 7.

The current alignment of the Pacific Northwest Trail climbs up to the Mt Baker Ski area along Highway 542. This busy mountain highway climbs two thousand feet in seven miles up a series of steep switchbacks with limited sight distance and no shoulder. On foot, it takes about two and half nerve-racking hours for a hiker to complete this hazardous stretch of the PNT. While some sections of the trail are enjoyed by all, only the most daring cyclists and thru-hikers recreate here. For these dedicated travelers, the desire to connect their footsteps between terminuses outweighs the risk posed by vehicles.

This video shows what it’s like to drive along Hwy 542 in the Mt Baker Ski Area.

The Forest Service is developing a comprehensive land management, conservation and recreation plan along the North Fork Nooksack River corridor, north of Mount Baker (PNT Section 7), and you can help by attending the next meeting, or by reviewing the proposal and sharing your input online.

The next public meeting in Maple Falls, Washington, will present proposed concepts including: recreation and trail projects, road and access improvements, campground reconstruction and relocation, as well as habitat and watershed restoration.

Your comments in support of the “White Salmon Route,” could help create new recreation opportunities on the Forest and make the PNT safer for everyone.

Instead of following Hannegan Pass Road, a gravel forest road along Ruth Creek, to reach Highway 542, the Pacific Northwest Trail would exit the road further east at the Goat Mountain Trailhead.

New trail would be constructed here as an extension of the Nooksack Cirque Trail. Other new tread would be built on the Forest up the White Salmon Arm to rejoin the current route of the PNT near Heather Meadows.

A National Scenic Trail has the power to forge connections between communities, habitats, and people from the world over. In Skagit County, the Pacific Northwest Trail wends through the foothills of the Cascades — joining the dramatic alpine environments on the Mt Baker-Snoqualmie National Forest — to the important coastal forests on Blanchard Mountain — to Padilla Bay, the most biologically productive estuary on Puget Sound.

The current alignment of the Pacific Northwest Trail between the National Forest and Blanchard navigates a complex patchwork of private property and working forests on Washington DNR lands, where access is not guaranteed to PNT users. In 2017, timber harvests along this route effectively closed the PNT for the short hiking season.

The construction of new trails along the Middle Fork of the Nooksack River and other Washington DNR lands could change that. The “Middle Fork Route” has the support of a growing coalition of non-motorized user groups, including the Pacific Northwest Trail Association, local running clubs, and local governments.

Based on local community input, and with the help of our citizen-based recreation planning committee, Washington Department of Natural Resources is developing a plan to guide outdoor recreation on DNR-managed working forests across the Whatcom County area for the next 10 to 15 years.

Now is your chance to voice your support by getting involved in the Baker to Bellingham Recreation Planning. Attend the next public meeting or make a comment in support of building trails along the Middle Fork of the Nooksack River online. Email your comments in support of the Middle Fork Route here.

Instead of following the Bell Pass Trail south toward the South Fork Nooksack Trail in the Mt. Baker-Snoqualmie National Forest, the PNT would continue west toward DNR land using either the Ridley Creek Trail or Elbow Lake Trail.  The PNT would then follow the Middle Fork Nooksack northwest along national forest and Washington DNR lands. At Heislers Creek, the trail would head southwest along the Van Zandt Dike toward Acme on DNR land, where it would access SR-9 utilizing a trailhead in Whatcom County’s Nooksack River Park.